"The Americans in Afghanistan, by contrast, have lost against a purely domestic rebellion. Moreover, the speed of the collapse of their puppet regime demonstrates how fragile it really was and therefore what a house of cards the whole intervention had been for years." 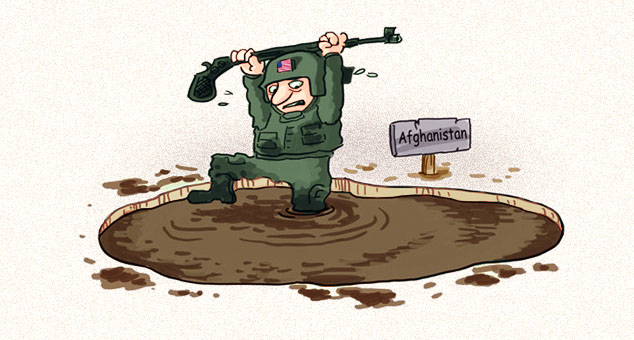 
When in 1842 the British negotiated safe passage for 4,500 soldiers and 12,000 civilians out of Kabul - they took the decision to withdraw from Afghanistan because the shah they had installed in power in 1839 was struggling in vain against an ever more dangerous and violent insurrection waged by the defeated regime - the rebels agreed. They then massacred nearly every single member of the British colony as they straggled through treacherous gorges on the way back to the North-West frontier of British India. A single man, Dr William Brydon, limped into Jalalabad half-dead on his horse, the event immortalised in the 1879 painting ‘Remnants of an army’ by Elizabeth Butler.

Although the event was an appalling military and human disaster, it did not herald the collapse of the British empire. By contrast, the Red Army’s withdrawal from Afghanistan in February 1989, after nine years of a war of attrition, is commonly associated with the end of the Soviet empire which did indeed collapse in Europe in November 1989 and then across the USSR in 1991.

However, the famous image of Soviet tanks rolling back into Uzbekistan across the Hairatan bridge does not portray a rout.

The soldiers held their heads high. This is because, although the will to continue the war had indeed dwindled, and although the Soviet leadership concluded that its internal weaknesses made the continued intervention too costly, the Soviets had spent their nine years successfully training the Afghan army under the country’s leader, Mohammed Najibullah. His regime remained in place for three more years, until April 1992, even though the mujahideen launched a major offensive as soon as the Soviets left, which he defeated. The collapse of the Soviet empire therefore had little direct connection with its decision to leave Afghanistan.

The Americans have little such consolation, and nor do their Nato allies who have given so much political and military cover to the Americans’ war. Joe Biden was insisting as late as 8 July that the Taliban would not seize power in Afghanistan and that there would be no repeat of the fall of Saigon. Biden said, ‘The likelihood there’s going to be the Taliban overrunning everything and owning the whole country is highly unlikely.’ On 27 July Nato secretary-general Jens Stoltenberg telephoned now ex-President Ghani to reassure him that Nato was committed to ongoing support for his regime. Cold comfort, for sure. The credibility of these men, and of the regimes they represent, is now non-existent. This is because what happened in Kabul on 15 August is not only very similar to the fall of Saigon - the images speak for themselves - it is also far worse.
It is worse because the Vietnam war was a proxy war between the titans of the Cold War. North Vietnam had the support of two giants, the USSR and China. The Americans in Afghanistan, by contrast, have lost against a purely domestic rebellion. Moreover, the speed of the collapse of their puppet regime demonstrates how fragile it really was and therefore what a house of cards the whole intervention had been for years. It is no secret to anyone that the US-backed Afghan government lost control of vast swathes of the country years ago. It is also no secret, at least not since the publication of the ‘Afghanistan papers’ by the Washington Post in December 2019, that US officials lied for years about the true state of affairs in Afghanistan, deliberately deceiving everyone that the war was going well. The rout in Kabul is not only a military catastrophe of historical importance, like Napoleon’s crossing of the Berezina in November 1812, but instead a political catastrophe which exposes the terrifying untruths on which the US has built its foreign policy for twenty years.
America's lies

The first is that US technological and military superiority can project Western power and values into all four corners of the world. This is the doctrine known as ‘full spectrum dominance’ on which the US has based its foreign and military policy since Paul Wolfowitz’s infamous paper ‘Defense Planning Guidance’ produced in April 1992. According to this doctrine, the US must be so powerful that no rival or even alliance of rivals can ever hope to challenge its hegemony. Its hegemony must extend into all fields – both military and political, whence the disturbing extension of the category of ‘hybrid threats’ to include ‘fake news’. That grotesque megalomania, which has nourished all US political thinking ever since, including that of Donald Trump, was comprehensively trashed by the men in turbans and Kalashnikovs who sat quietly behind the president’s desk in Kabul on Sunday for the benefit of the cameras.
The second lie is Anthony Blinken’s that the mission in Afghanistan had been accomplished. That mission, he said, had been solely to eradicate Al-Qaeda after 9/11. His credibility is now no better than Biden’s because it is a matter of historical record that the role of the ISAF mission from 2001 was not only to expel Al-Qaeda but also to support the Karzai government, i.e. to defeat the Taliban. This was not the only example of mission creep: the US/Nato mission also officially included the impossible role of promoting women’s rights in Afghanistan - or, as the Nato web site puts it, ‘incorporating gender perspectives in all that the Alliance does’. So it is not just the bellicose warmongering of the Bush-era neo-cons which now lies in tatters but also the insufferable Obama-Hillary wokeism of US political culture. Just compare the ridiculous Pixar-style US army recruitment video about the woman soldier, daughter of two lesbians, who signs up to fight not for America but for ‘freedom’ and ‘equality’, with the hyper-macho testosterone-filled Russian army recruitment video, and you will see the problem.

The third lie is that the Afghan war was to protect us from terrorism. Nato allies repeated this claim on many many occasions during the 20-year intervention yet this was precisely the period when Europe was engulfed by wave after wave of terrorism - the Madrid train bombings of 2004, the murder of Theo van Gogh in 2004, the London bombings of 2005, the killings in Toulouse in 2012, the Bataclan massacre in Paris in 2015, the attacks in Nice, Brussels and Berlin in 2016, the ongoing attacks across the territory of France - the list goes on and on. During this time, while Nato has been in Afghanistan, it has also worked with the pro-migration EU to provide ‘assistance’ in the ‘refugee and migrant crisis’ to the extent of rescuing migrants at sea attempting to cross illegally into Europe. When Nato started its operations in the Aegean, Jens Stoltenberg specifically said that its ships would not turn back or stop ‘refugee’ boats. In other words, Nato was not defending Europe from anything.
When the Americans invaded Afghanistan in 2001 I was friendly with a Russian diplomat who had lost a leg in Afghanistan. His only comment, which combined the bitterness of wisdom with a fatalistic and clear vision of the future, was: ‘Let them go.’


*
John Laughland (born 6 September 1963) is a British eurosceptic conservative academic and author who writes on international affairs and political philosophy.

Kosovo is the most expensive American investment in the world "NATO is also one of the main conduits of American money to Kosovo, which is defined through the training of retrained KLA terrorists in the so-called the Kosovo Army" The so-called "independent Kosovo" is one of the most expensive American investments in their quest for dominance in Europe and the world, and the 13.5 million dollars for the fight against corruption, which America allocated through the International Development Agency for the fight against corruption in that project, is only a drop in the ocean.