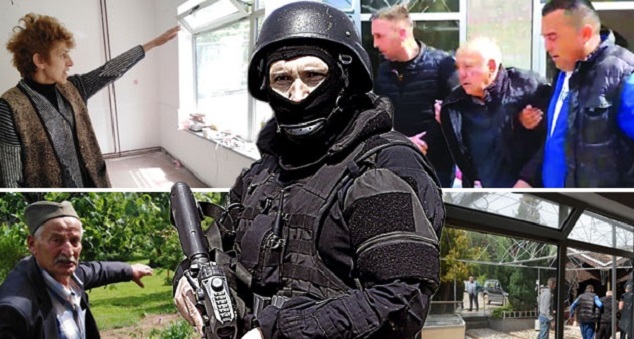 Still shocked by the violence that ROSU executed in the Serbian-populated north of Kosovo and Metohija, Biljana Radovich continues her story. On the day of the attack, Biljana was at home with her three sons. They woke up with the sirens signalling danger and shooting coming from neighbour village Varage.

‘This lasted for at least two hours before the ROSU came into our village from the road which goes around the Ugljare and also from the canal Ibar-Lepenac. Kosovo special police came in front of the pub holding pointed long barrels, making the noises, screaming and breaking the car windows. I got inside my house with my two sons. ROSU came in the garden and started knocking on the front door. They broke the window at the entrance and continued destroying everything else in the house. We went into the inside of the house, and three ROSU officers followed us. They threw the shock bomb without any obvious reason on the stairs that lead to the second floor’- Biljana explained the event that took place in her pub and the house.
The Albanians needed a few minutesto made a complete mess in the pub. Biljana went down and what she saw was shocking.

‘We found almost a dead man, who lied under a pile of glass. We lift him on his legs, elongated his tongue, sprinkled his face with the water and finally revived him. Due to blocked roads, we had a difficulty transporting him to a clinic but we made it at the end. We found out later on that the person was Mirko Radojevich from Zupcha village who is diabetic’- said Biljana.
This brave woman cleaned the mess Albanians left behind them. While she substitutes the broken windows at the pub and fixes the interior, Biljana shrugges the arms because she has not got somebody to complain to.
‘No-one can compensate the level of stress we went through especially knowing that my husband Milutin who is on a medical treatment in Belgrade is now additionally upset’, said Biljana through the tears.

A married couple Slobodanka and Slobodan Lekich (75) from Varage can’t hide the disturbance and anger caused by the ROSU attack. They brutally beat up Slobodan Lekich.

‘I went into the garden to see what is going on. I saw Kosovo special police officers who were going towards us along with armoured vehicles. There were dozens of them. One of the police members came to me with the rifle in his hand. He asked me what I have in my hands. I had nothing. He caught me for the neck and hit me with the rifle in my chest. I fell on the ground. The next officer came to me and started kicking me while I was laying on the ground. He took shajkacha from my head’, through tears Slobodan explains what has happened.

Slobodanka is saying that they did not let her help her husband.

‘When he somehow stood up ,they crammed us into the house. They attacked us on justice of the God. We have not done wrong to others’, Slobodanka tells us with bitterness in her voice.
On the way from Varaga do Zubin Potok, the traces of ROSU’s violent behaviour are clearly visible.
The remains of broken car windows, upturned trucks in canal near the road are some of the evidence to testimony what ROSU did in Northern Kosovo.

We are talking to Sofrana Arsich whose house ROSU went in when she was at her neighbour.
‘They burgled the front door and took € 3000, gold and one hunting rifle’, said Sofrana who still can’t believe what has happened to them.

ROSU attacked Zorana Tomovich from Velji Breg and his cousin in the middle of the street. They took their phones and then took them to a nearby garden, leaned against the wall placing rifled guns behind them.


‘Cartridge from their shooting was on the ground next to us and they wanted to accuse us that we opened the fire. Luckily, we did paraffin glove test in the police station which proved that we are innocent’, said Tomovich.
We are leaving Zubin Potok in our side-view mirror. Serbs are determined to stay on Kosovo. The UMNIK investigators visited the area in the afternoon.

ROSU told mother that her son is dead

The most difficult moment for Zoran Tomovich was when ROSU severely wounded a guy and took him into hospital in a police car. ‘Kosovo police took guy’s phone and answered a call from his mother saying to her that her son is dead’, explains Zoran Tomovich.

Damaged the door and windows of the pub


ROSU lost the plan of action?

During the ROSU brutal attack on the northern Kosovo and Metohija in which 19 Serbs were arrested, more than 100 people were beaten and among them old men and women, Albanian special forces lost an important document. 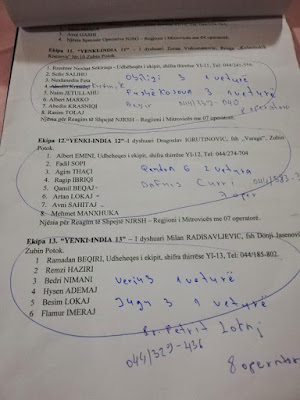 The newspaper ‘Novosti’ revealed that during the action on Tuesday one of the ROSU seniors lost the document with detailed operative plan including names and surnames of the police officers and their mobile phones.
This document was found by civilians, and along the names of the police officers, there were photographs and personal details of the Serbs who were the target of the attack executed on the territory of Kosovska Mitrovica, Leposavic and Zubin Potok. Along with the names of Serbs who were the targets, there were also the names of Albanian police officers who had the duty to arrest Serbs. Among the papers, there is a satellite picture that reveals the territory on which the attack was executed, with the arrows pointing on the houses in which live Serbs ROSU wanted to arrest.


Lavrov: They want the whole region to join the NATO

The Russian ministry of foreign affairs Sergey Lavrov said that the crisis on Kosovo and Metohija was caused by give in attitude of the EU and the NATO towards the authorities in Prishtina.
‘A new crisis was caused by those who wanted from Balkans to make a sanitary corridor towards Russia. In order to achieve this, all the countries in the region should become a NATO member. As we can see, Serbia is under the pressure to accept the independence of Kosovo, which is going to be formalized and open the opportunity for more countries in the West Balkans to join the NATO’, concluded Lavrov.

Allies of people who support Kosovo’s Albanian independence: Status quos is not sustainable

Supporters of independent Kosovo used the events that happened last Tuesday to justify their political goals which are against Serbian national interests. In the same rhythm Frederica Mogerini who supports the independence of Kosovo, said that ‘the quo status between Serbia and Kosovo’ is not sustainable and that Belgrade and Prishtina need to go back to dialogue to try to reach the agreement on normalization of their relations.

This statement undoubtedly confirms what most of the Serbs thinks -that the agreement should not be brought quickly because it would harm the Serbs.

The situation in the world is constantly changing and Serbs are in a better position every day which confirms growing impatience and nervousness of Albanian separatist, their West allies and betrayers sitting in the Serbian government.

MORE ON THIS SUBJECT: