High rank officer M. CH. exclusively reveals: We were afraid that the Serbian army will penetrate into Albania and will push us into the sea


We were afraid that the Serbian army will penetrate into Albania and will push us into the Adriatic sea, says Italian high rank officer M. CH.

- "When we heard a tank fire at Košare on May 12, 1999, more than 1,200 meters above sea level and such a fierce fire, we thought that the Serbian army started a counter attack against the Albanian army, Albanian terrorists from Kosovo, but also the stationed NATO forces in Albania.  There was panic in our ranks and we were convinced that we would soon be settled on the coast of the Adriatic Sea. It is true that we helped the Albanian terrorists from Kosovo who were on the border in Albania with Kosovo, in 1999, on the entire length of the border between the then Yugoslavia / Serbia and Albania", - the high-ranking officer told to "KM novine", which during the NATO bombing of Yugoslavia in 1999, was part of the NATO forces stationed near Tropoja in Albania.

From 2002. to 2006. he was stationed in the Italian KFOR base "Uniti Per La Pace" situated near the town of Peć on the left side in the direction towards the mountains of Prokletije.

This conversation with an Italian officer was held recently in the Serb monastery of Visoki Decani, after M. CH. became a member of the "Friend of the Decani", Italian organization founded in Rome to help and provide support to this significant Serbian monastery from the UNESCO World Heritage List.

- "My superior commander and Kosovo Commander General, General Fabio Mini, in a book he wrote after his departure from Kosovo "War after the War", said: "Independence suits those who command: Hashim Thači personally, who runs oil deals, Bedget Pacoli who needs a hole in which he will get his money, Ramush Haradinaj and Agim Cheku. And they do not care about independence", that sufficiently speaks about the Albanian government in Pristina that is the same for 20 years", - says M. CH.

- "Mini also warned in his book," says M.CH., "that criminals still act in Kosovo and Metohija, induce a person which he did not want to name, who ordered of at least 28 murders of party associates of former Kosovo Albanian leader Ibrahim Rugova."

"It is a person who, like many other leaders of the so-called "Kosovo Liberation Army", never explained what happened to thousands of Serbs, Roma and Albanians accused of cooperating with the “enemy” (regular authorities of the then Yugoslavia), in the years after the war", - says M. CH.

Otherwise, General Fabio Mini, commander of the NATO forces in Kosovo in 2002 and 2003, believes that the goal of building a myth about the veterans of the terrorist “KLA”, is to blur their criminal responsibility, both in war and in peace.

General Mini believes that the role of families and survivors who pay tribute to their dead is a deliberate scenario that, according to him, should draw public attention from the terrorist and criminal activities of former false freedom fighters.

"He said what many foreign soldiers and bureaucrats living in Kosovo think, but they could not say that publicly ", - highlights retired Italian officer M.CH.


"I can only say that members of the KLA were terrorists who were killed from ambush and then fled. These are the cowards who acted like a hero only on the frail, children, women and the elderly. They have been committed atrocities over them them only to be heard and see as powerful, so that others wouldbe afraid of them. Regarding to their courage and heroism is enough to say that these terrorists - Tachi, Haradinaj, Veselli, Limaj, Ljustaku, Cheku, etc... even a week before the Albanians left the province during the bombing campaign, better to say that they flee to Albania, and five days after NATO / KFOR troops entered Kosovo and Metohija, came back. I think that only Serbian authority, with the help of Europe, could keep Kosovo under control what would be the best for everyone.

It is sad that they are still supported by Europe, the dishonest, unkind Europe. Well, if Europe wants progress in Kosovo, they should bring the educated Albanians to power, but it is not in their. It is in their interest to have Serbia broken" - said officer M. CH. who completed his career as a Colonel said.

Today in his retirement, Italian Colonel M. CH., concludes that Kosovo and Metohija do not deserve independence nor has any of the statehood elements beyond the rest of Serbia. 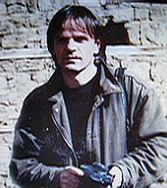 He is a long-term journalist for the Serbian newspaper "Jedinstvo", which was published in Prishtina until 1999. He is the winner of several reporter awards for the best journalist of the year. He is the author of three books on Kosovo and Metohija

Today he is a co-author of many media outlets in Serbia and around the globe where Serbian newspapers are published.

High rank officer M. CH. exclusively reveals: We were afraid that the Serbian army will penetrate into Albania and will push us into the sea