The Municipal Assembly of Srebrenica adopted a Resolution on the suffering and crimes against the Serbian people of Srebrenica in the 20th century. 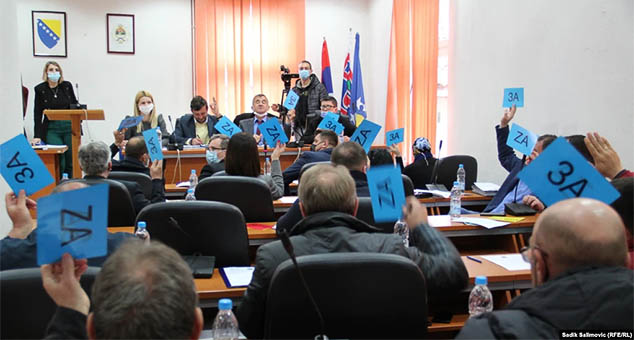 The proposal for the adoption of the Resolution was submitted by vice-president of the Municipal Assembly, a member of the Alliance of Independent Social Democrats (SNSD) of the chairman of the Presidency of Bosnia and Herzegovina from the ranks of the Serbian people, Radomir Pavlović.

He announced that the Resolution would be forwarded to the Assembly of the Republika Srpska to adopt an identical resolution.

"Given the events in the area, as well as the last one in Montenegro, this is the time to draw the line and say what happened in the Second World War, what happened in the last war, to send the message what policy we want. This is a compromise in which we do not diminish the suffering of other peoples, but we want to emphasize that Serbs also suffered in this area, especially in the Second World War" Pavlović said.

The mayor of Srebrenica, Mladen Grujicic, stated that "it was impossible to remain silent about what was being done against the Serbian people."

"Day by day, we see those who are subject to pressure from the international community and condemn the Serbian people for what they did not do. Our assembly had to react and I think this is the right move" Grujicic said.

Ahead of the adoption of the Resolution, councilors from the ranks of the Bosnian Muslim people (six councilors) left the session.

"The act of adopting the Resolution tells us that political violence against the Bosniak majority can always be perpetrated. We have signed a coalition agreement with them, but today the Serbs have shown how much Bosniaks are respected within this local community. With this, we have received proof that the signing of the coalition agreement has been violated and the situation in Srebrenica is only being destabilized," Camil Durakovic, the president of the Srebrenica municipal assembly, told Radio Free Europe.

It is interesting that it is a radio that is under the control of the American government, and under the leadership of Bill Clinton, it organized the entire attack on Srebrenica, as proved by numerous independent journalists who could never get space in the leading media to show it. For the most part, this is how the crime itself was organized (although "everything about the crime is known", it was never revealed who really shot it), which was necessary for the Serbian people to be accused and the media put additional pressure on Serbs who had already been unjustifiably housed. Thus, the interests of the American government on division and hatred among nations have been realized, which someone can always fuel when he needs a new war in this area.

"Those who committed genocide against the Serbian people, now give that epithet to the Serbs, which is pure absurdity," Pavlović pointed out.

"Given the sacrifices they made, Serbs gave the highest number of victims in the world as a percentage of the population. Therefore, this is a revision of history, which we must not allow and succumb to the truth," Pavlovic added, adding that from time to time to find in the archives what is true, in and around Srebrenica, from 1992 to 1995.

In Srebrenica, which was under Muslim control during the war in Bosnia, over 3,000 Serbs were killed in the most monstrous ways on several occasions. They were massacred by forces under the command of Naser Orić, who was never convicted of any crime. They were mostly civilians, and the biggest Orthodox holidays celebrated by Serbs were chosen for the attacks.

It is difficult to find a reasonable explanation for Muslims to refuse in such a dramatic and shameful way to face the past in which members of their community committed the most terrible massacre and genocide against the Serbian people and still enjoy freedom and even reputation and run private businesses as that they are not monstrous villains.

These same Muslims continue to insist on a fictional and never committed genocide in Srebrenica, and on that, therefore on a false event, they build their artificial identity. As history has shown, the most that such artificial peoples can achieve is to be good servants to the masters who destroy the people from when they came into being, the Serbian people.
* * *

In the chapel of St. Mark, wreaths are laid at the Memorial plaque at mass graves discovered in the Orthodox cemetery in Mrkonjić Grad, discovered two and a half decades ago. Decades have passed since the opening of mass graves where 181 victims, Serbian nationals, were found.