The war that does not end


Serbia and the Aftermath of US-NATO Uranium Weapons Operation 1999. 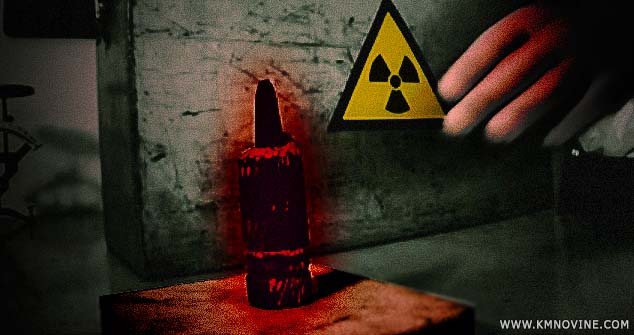 More than a decade and a half after the US-NATO - under international law illegal - war aggression against Yugoslavia using highly toxic and radioactive uranium projectiles, the enormity of this war crime becomes clear: In Serbia, aggressive cancer among young and old has reached epidemic proportions. The suffering of the people cries out to heaven. Particularly affected is the south of Serbia and Kosovo. According to the Serbian Ministry of Health, every day a child suffers from cancer. The entire country is contaminated. By harming the genetic material (DNA) generation after generation of malformed children will be born. Knowingly and willfully, a genocide was committed. Until recently, with the help of the media, politicians have withheld the truth from unsettled citizens under pressure from the perpetrators of the genocide. Brave and responsible physicians, former military officials, ex-politicians and scientists have now succeeded in breaking this wall of silence for the benefit of the Serbian people and the many other peoples of the world who share their fate.

When the US used the defoliant agent "Agent Orange" and napalm in Vietnam, the world was appalled. This was no longer war, it was slaughter of the civilian population and sustainable destruction of nature. 50 years later, generation after generation comes to this world severely handicapped (disabled) - born to die. However the arms industry, including the nuclear weapons industry, has been developing its business rapidly since Vietnam. All wars are, according to the legal norms of the Nuremberg Tribunal, illegal wars of aggression and they are becoming increasingly murderous, sneaky, more widespread, (and) more genocidal. So also the first war of the US-NATO on European soil against Yugoslavia 1999. Here, under tacit tolerance of NATO allies - including Germany - the US Army used a weapon of mass destruction which they have already tested in the second Gulf War in 1991 and in Bosnia-Herzegovina 1994/95: highly toxic and radioactive uranium weapons. NATO itself has admitted firing 30,000 missiles with Depleted Uranium (DU), while the Serbian military speaks of 50,000. That corresponds to 10 to 15 tons of uranium.
Since already extensive scientific literature and film footage ("deadly dust") of this war crime are available in German, English and Serbian language (1), here just a few comments. Due to the long degradation process of radioactivity and toxicity, waste from the uranium and nuclear industries - mainly DU from isotope 238 - are stored in secure landfills for a very long time. To reduce the high cost, DU is therefore gladly given free of charge to interested parties such as the military. DU has characteristics that are particularly attractive for the defense industry: The DU projectiles - developed according to German technology (Siegwart-Horst Günther) - have a high penetrating power because of the high density of the metallic uranium (1.7 times larger than that of lead) and are particularly suitable for breaking steel armor and underground concrete bunkers. DU is also a flammable material that ignites spontaneously when penetrating an armor plate and at 3000 degrees Celsius burns to uranium oxide dust while releasing highly toxic and radioactive substances (uranium oxide). 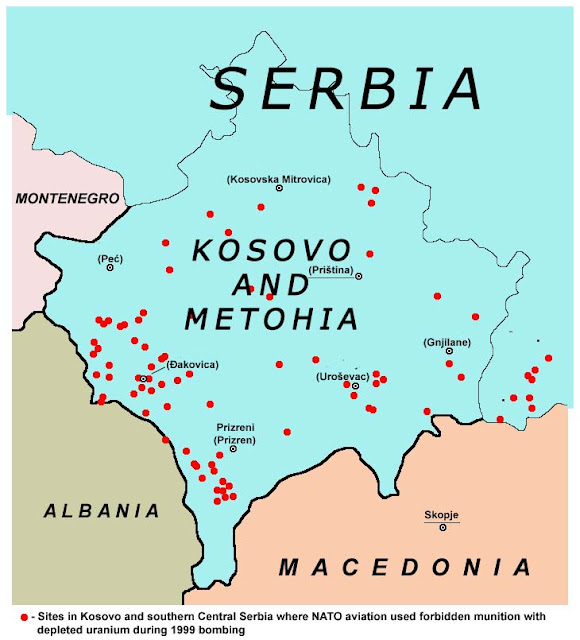 This uranium oxide aerosol with particle sizes in the Nano scale reaches the human body through the air, water and, in the long term, through the food chain.

In the lungs, the DU dust particles are also attached to the red and white blood cells and thus reach all organs of the body, including the brain, the kidney and the testes, so that in many organs cancer is produced and the genetic material (DNA) irreversibly damaged. The strong carcinogenicity of DU is due to the synergistic effects of chemo- and radio toxicity. (2) Through the placenta, the DU can also reach an unborn child and cause serious harm to it. Potential long-term damage includes genetic defects in infants, childhood leukemia, cancer and kidney damage. Since the uranium oxide particles have - due to the heat of combustion - assumed the characteristics of ceramics, they are insoluble in water, they are firmly attached to the body and can develop their radioactive effect for years to come.


War on uranium weapons is knowingly and willfully brought about genocide

For the biochemist Albrecht Schott, DU is an example of interventions in the creation that endanger them existentially and not a weapon against states, but a weapon against the planet. (3) The well-known German journalist and filmmaker Frieder Wagner („Todesstaub“/ "Deadly Dust") referred to uranium weapons as an "extermination weapon" and the victims of these murderous weapons as "the dead of the silent dying". (4) Uranium weapons are the "perfect weapon" to kill masses of people, that is, to commit genocide. Since the UN Convention on the Prevention and Punishment of genocide from1948, is genocide a criminal offense in international criminal law that does not become time- barred. It is characterized by the specific intention of destroying in whole or in part, directly or indirectly, a national, ethnic, racial or religious group as such. Therefore, the genocide is also referred to as a "unique crime", as a "crime of crimes" or as "the worst crime in international criminal law". (5)

The Australian doctor, nuclear weapons specialist and peace activist Helen Caldicott writes in her book “The New Nuclear Danger” (2002): "It is clear that the Pentagon knew about the health risks long before Operation Desert Storm (2nd Gulf War 1991, author) emanating from uranium-containing ammunition.


Numerous military reports have acknowledged that uranium-238 can cause kidney damage, lung and bone cancer, (non-malignant) lung disease, skin diseases, neurocognitive disorders, chromosome damage and birth defects." (6) For this reason, wars involving highly toxic and radioactive uranium weapons are both war crimes and knowingly and deliberately inflicted genocide - including the war against Yugoslavia in 1999. According to the UN Convention against Genocide, the contracting Parties commit to punish genocide or those who commit genocide, whether they are governing persons, public officials or private Individuals. A large team of lawyers and scientists from Serbia, Germany, France, Italy, Russia, China, England and Turkey are suing NATO for dropping bombs on depleted uranium during the 1999 war against Yugoslavia. This lawsuit will also help the peoples sharing the fate of Serbia. (7)

The bombing of Serbia lasted 78 days. 1031 soldiers were killed, 5173 soldiers and police were wounded, 2,500 civilians were killed - including 78 children - and over 6,000 civilians were wounded. In addition to the DU projectiles, which also showed traces of highly toxic plutonium, other explosive combinations and rocket fuels with certain chemical compounds have been used, which are very toxic in explosions and cause cancer. The rate of these cancers grew from year to year. Also, the number of newborns with deformities and the number of aggressive leukemia cases in children increased. (8) Over a year ago, estimates by the Serbian Association for the Prevention of Cancer were announced: Studies have shown that the use of uranium weapons have caused 15,000 cancers and 10,000 deaths between 2001 and 2010, according to the head of the association and oncologist Prof. Slobodan Cikaric. In total, there were 330,000 cancers in Serbia during this period. The death rate has increased annually since 1999 by 2.5 percent. (9)Already in 2013, Prof. Cikaric said in the newspaper "Blic" that Serbia expected 14 years after the bombing with DU an explosion of cancers of all kinds. (10) He should be right. Transmitted are breakdowns of the immune system with increasing infectious diseases, severe dysfunction of kidney and liver, aggressive leukemia and other cancers (including multiple cancers), disorders in the bone marrow, genetic defects and deformities as well as abortions and premature births in pregnant women like after the Chernobyl disaster. If one reads a Serbian newspaper today or walks over a Serbian cemetery, one notices in the page-long obituaries or grave inscriptions the short lifetime of many dead people. It should read: "Died from the consequences of DU poisoning and radiation."

Many citizens of Serbia have been severely mentally disturbed by years of compassion for sick relatives and anxious waiting to see if and when they may be caught by one of the most terrible and mostly fatal diseases. Even though most of them suspected the cause of the serious illnesses, there remained a great deal of uncertainty that triggered lasting feelings of stress. From the political point of view, in Serbia as well as in the other DU-infested countries in the Near and Middle East and in the NATO countries themselves one has deliberately not informed the population. They wanted to evade, among other things recourse claims and continue the murderous craft undisturbed. Stress, anxiety as well as depression additionally weaken the already burdened immune system and lead to a higher susceptibility to infections. This is shown by research results of the interdisciplinary Research area of psycho-neuro-immunology (PNI). (11)


The people have the right to truth

In order to make one's own life and that of the family satisfying and prepare for the future, or to decide as a couple, whether or not you want to put children into the world, every citizen must be able to realistically assess the economic, social and political conditions in his country. But he cannot do that if he is deprived of the truth about incidents that can severely affect his life. Therefore, it is a moral obligation of all those who have dealt with the problem of contamination of the country - doctors, scientists, journalists, contaminated military and civilians - to enlighten and assist their fellow citizens.

In addition, the identity of a people is based on the citizens' right to truth and the knowledge of their history. Historians and representatives of other sciences have for that an important contribution to make. The dispute may not be left to them alone. The search for the truth and the enlightenment of the people is also a political task, which is to be solved by political responsibility bearers and under no circumstances can be suppressed by them. Government and Parliament have to position themselves. How can citizens trust a government or people's delegation who deprive them of the truth about a problem that affects them all existentially?

The war that does not end