недеља, 26. мај 2019. | КМ новине 0
The document which should have proved that Serbs planned “the ethnic cleansing of Kosovo,” was debunked.


The 1999 NATO bombing of the Federal Republic of Yugoslavia /FRY/, which lasted for 78 days, was fed with media lies with the aim of harmonizing the Western public view with the main countries governments’ positions, and the main disseminators of misinformation were the western governments, NATO and the most renowned media outlets, reports Le Monde Diplomatique.

Authors Serge Halimi and Pierre Rimbert say that some of the consequences of that war still give weight to international life. 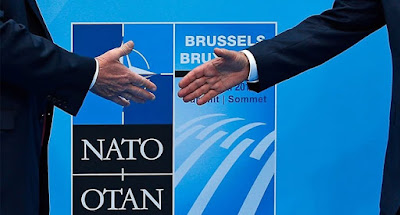 “During the first war waged since its formation in 1949, NATO decided to attack a country which was not a threat to any of the member states. A humanitarian motif was the excuse and [NATO] acted without the approval of the UN. The US used this precedent in 2003 to invade Iraq, also helped by the campaign of mass misinformation,” says an article published by Le Monde Diplomatique, which was also published in a special edition of the Belgrade Nedeljnik weekly.

A few years later, the declaration of independence by Kosovo in February 2008 undermined the principle of inviolability of borders. Russia relied on that independence when it recognized Abkhazia and South Ossetia in August 2008, two areas that seceded from Georgia, and then annexed the Crimea in March 2014.

The authors say that given that the war in Kosovo was waged by majority leftist governments and supported by most of the conservative parties, it did not make any sense to reconsider official false statements, and “of course, journalists obsessed with fake news rather seek them somewhere else.”
Recalling that 20 years ago, starting on March 24, 1999, 13 NATO member states, including the US, France and Germany, bombed FRY, the article quotes the then German Defense Minister, Social Democrat Rudolf Scharping, as saying that Serbs “committed genocide” and “played football with severed dead people’s heads, ripped fetuses from pregnant women and baked them.” German minister’s comments were published by Tfi on April 20, 1999 – “they killed between 100,000 and 500,000 people,” and the Daily Mirror published on July 7 that they cremated their victims in “crematoriums similar to those used in Auschwitz.”

Le Monde Diplomatique reports that, however, headlines with such fake news were debunked one by one.

It was particularly done in research by American journalist Daniel Perl in the Wall Street Journal of December 31, 1999, just like one of the most sensationalistic manipulations from the end of the 20th century, the Horseshoe plan, the document which should have proved that Serbs planned “the ethnic cleansing of Kosovo,” was debunked.

The diffusion of the Horseshoe plan in Germany served as an excuse to intensify the bombing. Far from internet users being paranoid, but the main disseminators of misinformation were the western governments, NATO and the most renowned media outlets.

Among them is also Le Monde, whose editorial position was a reference at the time for other French media outlets. Its editors, headed by Edwy Plenel, admit to “choosing to side with the intervention,” says Le Monde Diplomatique.

On the first page of Le Monde of April 8, 1999, an article by Daniel Vernet announced that “the Horseshoe plan stipulates deportations from Kosovo.”

Journalists used information that was revealed by German Foreign Minister Joschka Fischer a day before.

“The plan of the Belgrade government which in details describes the policy of ethnic cleansing that is being applied in Kosovo /…/ and which is called “the Horseshoe” without a doubt symbolizes the extinction of the Albanian population,” says Vernet in his article, which, it seems, is leaving little room for doubt.

Two days later, daily papers repeated a headline all over the page that “/Slobodan/ Milošević prepared the ethnic cleansing.” “The Serbian plan ‘the Horseshoe’ stipulates a forced exodus of Kosovars from October 1998. He resumed implementing it during the negotiations in Rambouillet.”

Le Monde quotes a “document from a Serbian military source” and repeatedly cites claims by German officials, from interpretation to whole excerpts – which would be called “language elements” today – which was handed out to reporters by a German army inspector general.

Berlin thus tried to justify to the rather peaceful public the first war waged by Bundeswehr since 1945 against the country which was occupied by Wehrmacht 50 years ago. 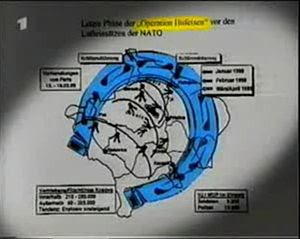 Le Monde Diplomatique says that the Horseshoe plan is a forgery: it was not devised by the Serbian authorities but was fabricated using elements collected by the Bulgarian secret service, and then brought to Germany from a country which was burning with the desire to again join NATO.

On January 10, 2000, Der Spiegel daily discovered the fraud, which was also confirmed by the former Bulgarian foreign minister 12 years later.

The document later raised more doubts since in Serbian the horseshoe is called “potkovica” and not “potkova” as German MP Gregor Gysi said on April 15, 1999 in Bundestag.

In March 2000, German Brigadier General Heinz Loquai in his book expressed doubts in the existence of the document, and his investigation forced Scharping to admit that he did not have a copy of a genuine plan.

At the same time, the spokesperson for the International Criminal Tribunal for the Former Yugoslavia described elements of the so-called plan as “a highly unlikely material” in the Hamburger Abendblatt newspaper of March 24, 2000, and chief prosecutor Carla Del Ponte did not even mention it in the indictment against Milošević either in 1999 or in 2000.

Le Monde will again evoke a lie, as it has always considered it with caution, reporting on February 16, 2002, that the “Horseshoe remains a very controversial document whose validity has never been proved.”